New York, NY – Capelli Sport is proud to announce a new partnership with Maryland United FC. With a multi-year agreement in place, Capelli Sport will become the Official and Exclusive Uniform and Apparel Supplier for one of the top youth programs in the United States.

Maryland United FC, a non-profit organization dedicated to nurturing committed soccer players by providing the highest level of education and instruction, and Capelli Sport, the international sportswear and team wear brand, have announced a long-term partnership between the organizations. Per the terms of the agreement, Capelli Sport will become the Official and Exclusive Uniform and Apparel Supplier for Maryland United FC, looking to expand its presence in one of the largest soccer hubs in the nation.

“We are thrilled to enter into this agreement with one of the most prominent youth development programs in the country,” said Capelli Sport President and CEO George Altirs. “Nurturing young talents and individuals both on and off the pitch is key. We look forward to playing a positive role alongside Maryland United FC throughout this partnership,” Altirs continued.

“We are delighted to announce our new partnership with Capelli Sport. Capelli Sport will provide our club with high quality custom uniforms, training gear and fan apparel for our players, coaches and families.  Their corporate philosophy is in line with our mission statement and supports the growth of the athlete as well as the individual. Furthermore, the support and vision of George Altirs, Jason Arnold and their team, was evident from the beginning and we look forward to developing a strong and valued partnership,” said Maryland United Technical Director, Steve Campbell.

Maryland United FC strives to develop confident players with the goal of not only reaching their full athletic potential but also in becoming active and productive members of the community. The club formerly known as Freestate SC rebranded to become Maryland United FC in 2013. The club has been a charter member of the Girls ECNL since 2009 and became a charter member of the Boys ECNL in 2017.

​Capelli Sport was founded in 2011 by President and CEO George Altirs, with the mission to provide quality, functionality and design for high-level performance on the field. Altirs’ more than 30 years in the apparel, fashion and accessory business with parent company, GMA Accessories, led to the creation of Capelli Sport. The brand’s innovative, world-class training gear, equipment and uniforms have yielded many global recreational, youth, club, collegiate, semi-professional and professional sports partnerships.

Capelli Sport is an innovative sportswear and team wear brand focusing on design of the highest quality, latest fabric technology and design functionality for world-class performance on the field.  For more information on Capelli Sport, current partners, and how to join the team SHOP CAPELLI SPORT, visit the ONLINE CATALOG PAGES at capellisport.com, follow them on Twitter (@capellisport) and Instagram (CapelliSport), or visit the Capelli Sport Facebook page.

Maryland United FC is dedicated to serving the needs of the more committed soccer players by providing the highest level of education and instruction available thereby preparing the players to be a proud representative of the Club at local, state, regional and national competitions. Maryland United FC strives to develop confident players who have not only reached their full athletic potential but are also prepared to become active and productive members of the community.  Visit Online at mdunitedfc.org, follow them on Twitter (@Maryland_United) and Instagram (marylandunitedfc) or visit the Maryland United Facebook page. 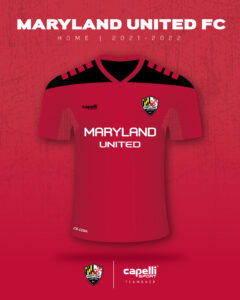 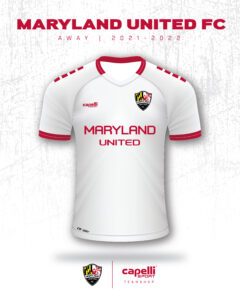 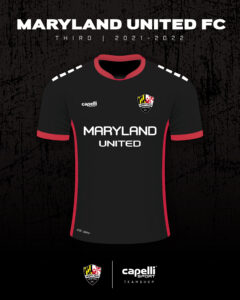 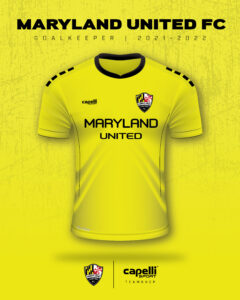